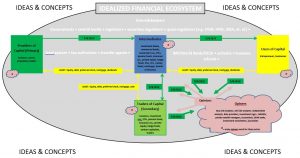 Financial Ecosystem Diagram: Originally created by me for CFA Institute

Among the major actors in the financial ecosystem are:

NOTE: Ideas and concepts float around the financial ecosystem and also inform the functioning of the ecosystem.