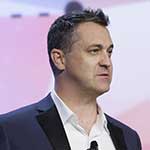 
Tucker is Chairman of the American Geographical Society (www.AmericanGeo.org), where he launched Geography2050 a multi-year strategic dialog about the vital trends the geography of our planet. At AGS, Tucker has also helped launch its EthicalGEO Initiative (www.EthicalGEO.org), and the Locus Charter as an international charter for the responsible use of location technologies.


Previously, Tucker was the President and CEO of a high-technology firm in the area of geospatial intelligence that he took from startup to acquisition. Prior to his time in industry, Chris was the founding Chief Strategic Officer of In-Q-Tel, the CIA’s venture fund. And prior to that, Chris served as the Special Advisor to the Executive Vice Provost of Columbia University.


Tucker is the author of A Planet of 3 Billion (www.Planet3Billion.com), and spends his abundant spare time working to bend the global population curve, to save our planet and our species from climate catastrophe and ecological annihilation, through empowering strategies toward women and girls.